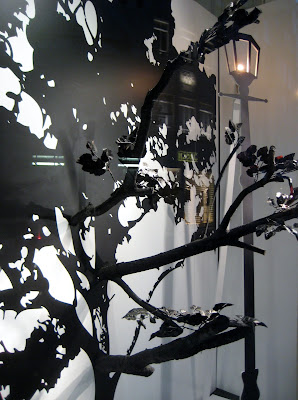 It looks like the Tree trend is well underway along Bond St. right now.  Smythson, Hindmarch and Mulberry are branching out to bring us their latest schemes in all sort of variations on the same theme.  At Smythson, these Black painted branches protruding from a two dimensional graphic looked slightly odd originally, although eventually grew on us.  However, just after capturing these windows, several handbags were placed hanging from the branches.  Hmmmmmm......well, we guess, just like cash, that's where they grow?  One completely annihilated scheme.  Anyway, just opposite, Hindmarch in their tiny window scheme have installed a similar theme, albeit in White.  Virtually next door to Smythson, Mulberry's installation is a little more complex, fun and communicates an interesting narrative.  Sadly, with so many schemes in these types of stores, the very ugly security grilles have been put in place which do nothing to enhance these schemes whatsoever.  We've tried to photograph these windows with a minimal view of these grilles, although with the recent hit-and-run-smash-and-grabs at D&G and Jimmy Choo, its hardly surprising that they are in place. However, we do wish someone would come up with something a little more sympathetic which enhances the product and environment rather than slowly and surely suffocating it while the silent sellers fight to do their jobs.  All that hard work implementing these schemes seems to be crushed faster than the guys who are trying to steal it because someone in a head office boardroom, possibly in another country, thought it would be a good idea.  You couldn't make this stuff up. 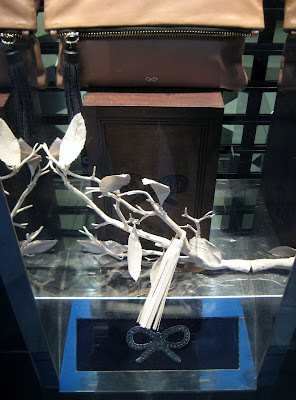 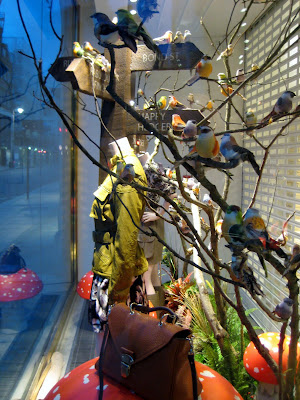