On the Streets, Berlin 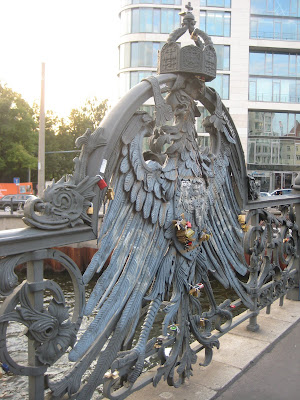 As in Rome, Berlin and to a certain extent in London we are seeing these padlocks appear attached to our famous bridges.  Where has this trend come from?   We found the below explanation at http://www.guardian.co.uk/books/2011/aug/24/novel-lovers-padlocks-bridges-moccia
'Federico Moccia's bestseller Ho Voglia di Te (I Want You) features a young couple attaching a lock to Rome's Milvian Bridge as a sign of eternal love.'
'The thousands of sweethearts who have decided to imitate this touching gesture are among the 2.5 million readers of the book, which charts the romantic entanglements of brooding young Romans who hang out in the upmarket streets of the Parioli district'.
'The 2006 book was a follow-up to Moccia's first blockbuster romance Tre Metri Sopra il Cielo (Three Metres Above the Sky), which bombed on its release in 1992, only to become a cult hit with Roman students 12 years later.'
'Tapping into the kind of tortured adolescent passion that has made the Twilight series so successful in the US and beyond, Moccia's career went stratospheric when Italian teen heartthrob Riccardo Scamarcio was cast to play the lead in the books' big- screen adaptations.'
'But not everyone is happy about this new fad, with Italian officials claiming that the love padlocks are damaging stonework, and daily newspaper La Repubblica calling the locks on the Rialto bridge in Venice "vulgar".'
"That seems really excessive," said Moccia. "If you go to Venice, you'll find that they have bigger things to worry about."
at Friday, September 02, 2011

Email ThisBlogThis!Share to TwitterShare to FacebookShare to Pinterest
Labels: Berlin, On the streets