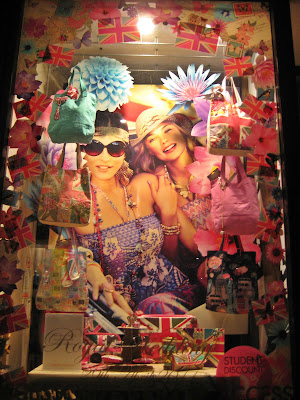 "You can never have enough hats, gloves and shoes" according the character Patsy, played by the ever lovely Joanna Lumley in Absolutely Fabulous (1992).  At Accessorize, "you can never have enough stuff, stuff and stuff"  http://www.retailstorewindows.com/ (2011)  Of course, we're poking fun a little at the brand, who incidentally we actually rather like.  OK, well they stack everything to the rafters and do cram just about everything into their relatively tiny windows, however they do make an effort and this is commendable.  Naturally, just like any other mainstream brand, they are cashing in on the pending big event on Friday, and who can blame them?  Although if one stands back from this scheme a little it does have rather Pink overtones in between the Union Flag merchandise.
Purely coincidentally, the activist Peter Tatchell, (we quickly read on-the-hoof in the press on our way to the office -  so please don't quote us on the accuracy of this), has personally delivered to Buckingham Palace, a rather large Pink Message to William and Kate, requesting that they come out (obviously not literally) in support of same sex marriages, in the light of their own high profile marriage.  We have to hand it to Peter Tatchell, that the guy works tirelessly for equality and of course has our full support.  While there is undoubtedly absolutely no connection between the scheme here and Peter's Pink Envelope, it does offer an opportunity to reflect on where we are at, and why people such as Tatchell are still having to fight for a cause that was already won?  Anyway, we're sure Friday will be a day fully Accessorize'd. 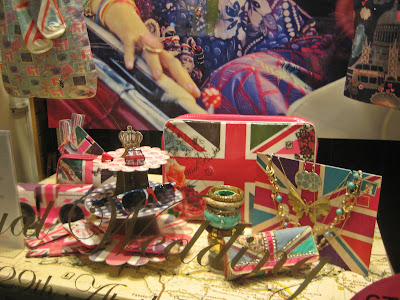