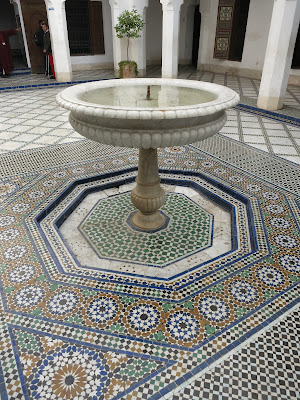 Having spent hours dodging the incredibly manic traffic here in Marrakech we've decided to find some peace at the Bahia Palace.  The streets here in Morocco are so busy and any sense of order appears to be beyond our comprehension, although there is clearly a rhythm to it and we just need to adjust our western views to the way it all works.  After continual gasps from near misses of other cars while in taxis and people on mopeds weaving down the tiny alley ways just brushing gently past us at high speed, donkeys pulling carts and kids going to school, with a sprinkling of westerners all simultaneously trying to squeeze through the same tiny spaces it is quite amazing how no-one seems to get hurt, but it appears to work.  Anyway, we wanted to have a look at the incredible craftsmanship here at the palace, from fret work, Iron work to mosaics.  Its a shame that this space is unfurnished as the life appears to have been sucked out of it, but we guess its probably partly our (as in Westerners generally) for buying it all in the first instance while this developing country has been hanging by a gossamer thread in its attempt to haul itself out of poverty. 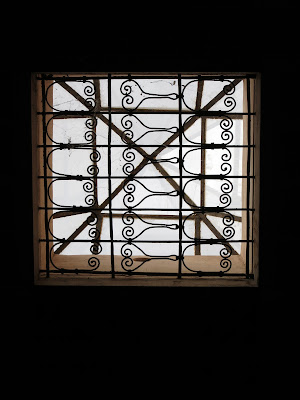 Over 4 MILLION potential new customers would have seen your name here by now. Contact us at londonart@hotmail.com for your space with your logo and link to your site from http://www.retailstorewindows.com