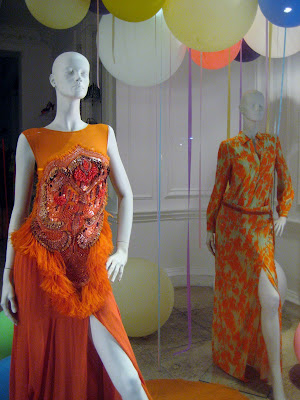 Aren't the colours used here at Mathew Williamson just so wonderfully vibrant?  Over the past few months we've seen an increasing use of balloons in schemes around the world from Loewe in Paris to French Connection here in London. We've placed them all under a kind of 'air trend' in conjunction with the use of clouds that we've seen at places such as Zara (globally), the Bon Marche in Paris and even being used at the Apple store.  Schemes at this brand can be a little 'hit and miss' although this one does look rather cool, dont you think?  We would had far more of these balloons in place though ourselves however and added in some giant ones at that.  Still, the product looks superb and is of course after all, king. 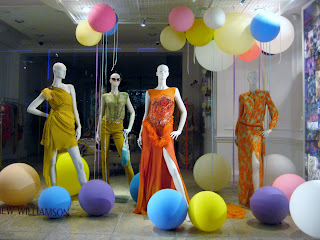 Jonathan Baker M.A. (UEL), M.A. (CSM) is Course Director at one of the world’s leading centres of Fashion, lecturing in Fashion Visual Merchandising & Branding and is former Chief World Expert in VM for WorldSkills.org. He produces visual research for global retailers and industry suppliers, is a freelance VM and Retail consultant with clients in China, Russia, USA, Middle East, guest speaker for commercial events, Academic External Examiner and if that’s not enough is based in LONDON. Look out for our first book, Fashion Visual Merchandising published by Bloomsbury Press available in English, Spanish and Portuguese (2nd Edition coming soon in 2019)