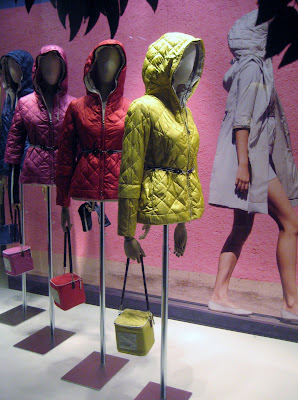 We can hardly believe its been almost a month since we looked at London windows.  However, nothing revolutionary has happened in our absence of course.   Margaret Thatcher still thinks she's the Queen, everyone in the US still thinks that Sarah 'Fergie' Ferguson sings with the Black Eyed Peas and H an M have rolled out their Jessie 'J' Its not about the Money, Money, Money 2011 video referenced scheme.  Of course its freezing not having the luxury and the warmth of the Nevada Winter sun after we had warmed up like little lizards on a rock (and simultaneously air con'd), but ah well, we're glad to be back in Blighty.  Anyway, while popping down to Bond street with jet lag the size of a small European country and looking like the old craggy stewardesses who still think they are flying Pan-Am, we happened upon this very delicious scheme at Max Mara.  Wow, look at these colours, just superb.  Such a simple scheme, bust forms placed in a repetition format with a large format graphic.  Not revolutionary, but all beautifully done of course.  In the meantime someone please pass the Melatonin and a pint of something Duty Free (on the rocks) 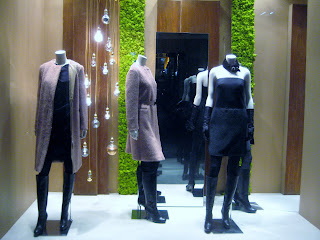