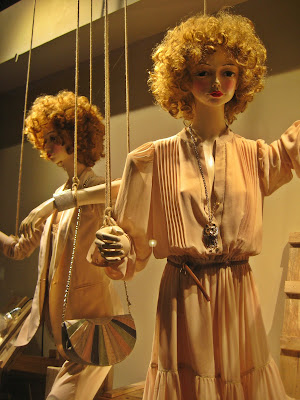 If we hadn't included the company name above this entry, would you have recognised this brand?  The answer is invariably No.  How exciting, eh?  Finally we can walk along the high street and while most of the mid-range brands look identikit and without the brand name above the store, we quite honestly wouldn't know where we were, Mango is at least one of the brands thriving on the differentiation.  How refreshing.  This scheme (or rather just one window) reminds us very much of two things - Jessie J's Price Tag video "its not about the money, money, money, we dont need your money, money money, we just wanna make the world dance........"  or alternatively the work of Hans Bellmar, Death, Desire and the Doll (although without the death).  Of course this scheme is rather more tame than the work of Bellmar whose installations speared right to the core, the forbidden areas of the human psyche.  Bellmar once said, 'I want to reveal scandalously the interior that will always remain hidden and sensed behind the successive layers or the human structure and its last unknowns'.  He also felt that religion was his great enemy and that the UK and the USA were too puritanical for his work although the root of the problem was that it was difficult to distinguish his work between erotic art and pornography.  Naturally the scheme here is neither of them however it is yet another link to Surrealism that we have seen on the high street, particularly in light of the recent scheme at Tiffany.  Having been a professing surrealist from the 1930's, a keen activist, living in poverty Bellmar also collaborated with such greats as Ernst and Cocteau and his work is now seen as intellectual art as much as eroticism.  Still, whether we make these links or whether they in fact exist (or not), it is at least fascinating to see such an incredible leap forward from this brand. Lets just see who follows, eh?...... In the meantime " Ain't about the (ha) Cha-Ching Cha-Ching. Aint about the (yeah) Ba-Bling Ba-Bling. Wanna make the world dance, Forget about the Price Tag". 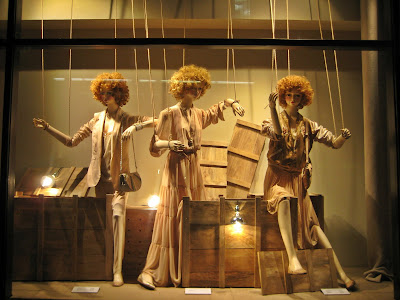