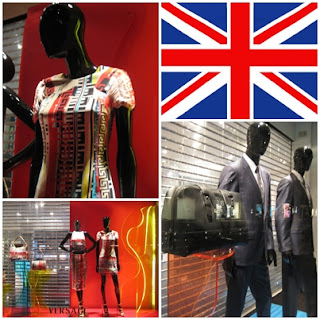 In 1987, the film 84 Charing Cross Road, a British/American drama was produced based on a play by James Roose-Evans and letters sent between Helene Hanff and Frank Doel.  In 1949, Helene Hanff in New York while searching for British literature titles noticed an advertisement in the Sunday Review of Literature and contacted the shop Marks and Co. (84 Charing Cross Road, London) and the then manager Frank Doel who fulfills her requests, and so ensues their long distance friendship.  Their correspondence includes a variety of discussions and as their friendship evolves Hanff begins to send gifts and food parcels in order to help Doel during the food shortages of World War II.  Sadly, they never meet.
Of course with the age of digital technology we're able to send messages at the touch of a button and because of this media it has enabled the wonderful opportunity to work with my incredible colleague Professor Ronald Knoth, at The Laboratory Institute of Technology in New York.  Professor Knoth and I regularly (several times a week) exchange messages from London to New York, and back again, much like Hanff and Doel, although in our case often sharing images of the best (and occasionally the worst) in Visual Merchandising from London and New York.  And thankfully, we have met.  Professor Knoth also writes regularly for his own blog site, http://www.bespokenfor.net/ in a way I can only aspire to be able to do.
Here in London, as in New York, we can see the visual effects of the global economy. Personally, I am wholeheartedly in support of localised creativity,  never really understanding the need or want to go shopping in places that have the same presentation and same merchandise that one has spent several hours travelling to?  I have also often felt that part of the shopping experience is surely the enjoyment through the discovery of new 'stuff' that one cant see or buy at home? (steps off podium)
That said, the concept behind this project was to photograph a range of brands from luxury to value retailers at the same time on the same day in our respective cities and taking that moment in time to reflect on where we are or maybe where we want to be?  Are we as visually commercially homogenised as I believe?  Or are there clear visual differentiations between what is happening in London and in New York?  From the visuals here and the ones posted by Professor Knoth at http://www.bespokenfor.net/ you will of course be able to decide for yourself.  Part of the process of capturing this zeitgeist was to also see what was reflected back at us and therefore we have deliberately captured the views in the fenestration of London streets and New York skylines.
Ralph Lauren: London and New York
One of the enviable elements of New York store windows from a London perspective are the amount of spaces they have to work within.  So many of the central London commercial spaces are historical buildings (even if only the facade is original) and protected by the UK Government and in much of the case the Crown Estate which limits what can be done with them.  While of course this is not a bad thing, as it is protecting heritage, it does present its own limitations.  In the home country of the brand Ralph Lauren their stores definitely have the upper hand.  Beautifully presented, simply the size of the spaces used here for presentation offers the opportunity to create whole aspirational environments within which to place the product.  Here at the London store, the images also reflect beyond the scheme views along Bond st. 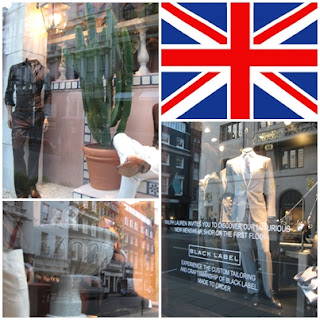 The London Fendi site is currently closed (although of course the merchandise is availalbe at places such as Harrods - before this appears on a google search and Fendi correct me).  With the pending Olympics in 2012,  London is being transformed beyond recognition with building work happening the type of which one would only see during times of plenty.  Building sites for cross-rail (a new rail link stretching from East to West through the shopping mecca), facade-ism, and buildings are changing from wealthy hands to wealthy hands.  Many luxury brand stores are swapping places around town right now also, with more on the cards this year for reasons to which I'm not privvy.  In the meantime, the New York store continues to offer, seemingly effortlessly, its merchandise placed as if the mannequins here are waiting for something that's just about to happen.  In London, the hoarding communicates the image of the same scheme in absentia. 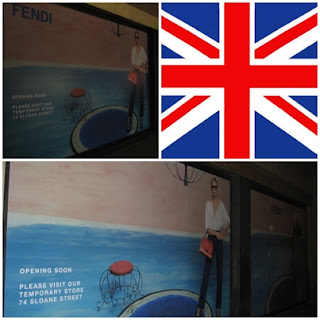 More tea Vicar? In the land of heritage and one that seems to make films albeit in limited amounts that nearly always seem to be staring Helena Bonham-Carter floating around in a period costume and perpetuating the myth that we all all live or lived like this - and of course we do.  Garden tea parties with Her Maj. the Queen naturally fill my diary too.  Banana Republics offering of topiary structures alluding to quintessentially English country gardens set against the exotica background jar rather in a country with one time zone and naturally growing flora (elsewhere) that one could only wish for.  For our American cousins the product has been placed with the use of hangers. 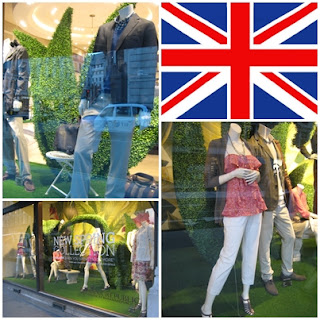 Zara, of course is a brand rather closer to home.  OK, well it is a European brand (Spanish) and while we as British seem to consider ourselves as British with Europe attached, we are also equally aware that to everyone else we are all European (but don't say I said so).  With its apparent eccentrics and oddities, borne historically out of suppression, London particularly (within Europe) seems to breed and celebrate more the differentiation and the rawness of creativity while pushing these boundaries.  The New York scheme at Zara, definitely appears to have a kind of enviable Parisian sophistication particularly set against the London 'street' influenced scheme presented here along the Oxford St. branch of the store. 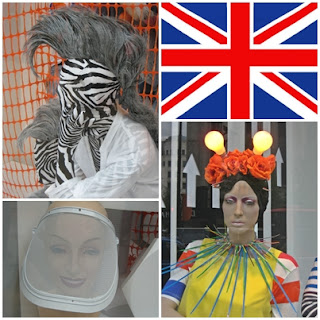 Hennes and Mauritz appear to have exploded onto the global retail scene over the past few years.  With its Swedish origins and their collaborations with such heavy weights such as Stella McCartney and Lanvin and their subsequent designs for Ebay....oops.....designs for H and M, we have seen a mammoth growth from this company over the past few years.  Of course, like many of the stores in New York, the H and M stores are, compared to London, of gargantuan proportions, in fact temples of consumerism. London however simply has a lot more of them, kind of shrines in the temples by comparison, although only a matter of 100 metres or so from each other covering every possible customer flow on the high street - ya' know, just in case one of us tries to escape through the city gates without buying anything. 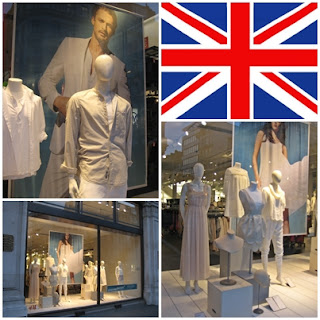 So are we really very visually different?  Well, there are some small differences across the brands that are pictured here although of course essentially they are the same or slightly different versions of the same thing, By the nature of branding, one would expect to see this.  We as British or American while speaking various versions of the same language we are culturally very different and this of course is what makes everything all so interesting and something we can celebrate.  We are not a brand ourselves as such and yet are expected to slot into a category dictated to by these global companies.  Is this right or should we be shouting for greater differentiation?   I would sway towards the latter myself and still believe in harnessing our local creativity rather than trying to fit into a mold dictated to us by a head office that may be a 1000 miles away from the final outcome - but that's just me.  We can see from brands such as Anthropologie and to a certain extent at Diesel that this does work but of course profits sadly rule.  What Hanff and Doel would have made of this one can only speculate and does it matter anyway?  In the meantime, I'm sure Professor Knoth and I will continue to share the best bits of our cities visuals regardless.  On a final note, the site of 84 Charing Cross Road is now a nightclub.
at Saturday, April 23, 2011