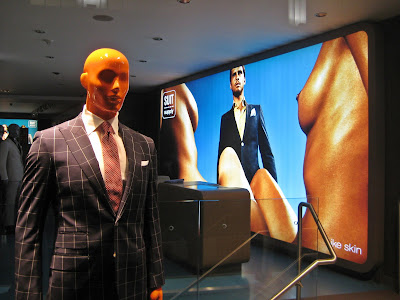 We have passed this store on many occasions but have never really looked that closely at it.  If you're in to suits, then I guess Suit Supply might be a place that you may want to check out?  Situated just off Saville Row and a stones throw from that Californian dystopia by the name of Aber....   oh you know the one, Suit Supply grabbed our attention momentarily for two reasons.  Initially, the mannequins here appeared to be a high gloss Orange (tango-d) version of the Blue Man group, and secondly and most importantly we caught a glimpse of that sly revenge fantasy of male impotence - the graphic behind.  Clearly this is staunchly heterosexual male territory? (Because Gay men dont wear suits, right?)  On the right hand side of the graphic we have the erect nippled tanned female and on the left we initially thought this was a male figure with moobs, however, on closer inspection it appears to be another, albeit nipple-less female.  Both figures are clearly placed in sexually provocative positions as if the vacant and clearly detached male in a suit jacket is God-like and to be worshipped by these tanned nipple-erect and nipple-less females? (we dont agree that this should ever be portrayed and we would never support this thinking, in fact, quite the reverse).  Laughably (and a clear signifyer of male ignorance) quite oddly, the way the graphic has been so badly cut, the image appears as if  the male in the centre of the image is actually sat on a high chair and has very feminine closed legs daintily crossed at the ankles.  The call to action in the text "Like Skin" doesnt seem to live up to the merchandise dressed on the mannequins.  Would you really want your skin to hang so badly?  We really wanted to like this store but sadly the thinking of this brand seems to represent the size of the space it has - tiny.  Just keep walking to either Bond St. or Regent st. on your way through this pass-through street.. 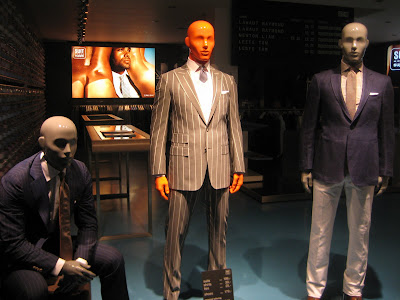